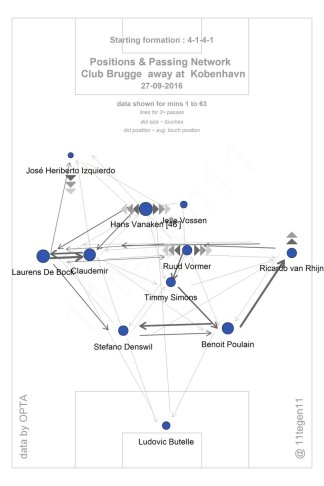 Manchester United bought French midfielder Paul Pogba for (around) 105 million euros from current Italian champion Juventus Turin. When another transfer record gets broken, the obvious question is whether the player is really worth that much money.

I will not go into the moral side of this discussion, the only thing I want to say about that is the actual value of that amount of money doesn’t matter anymore for top level teams. All world class players are sold for more and more money, because clubs get more money out of broadcasting rights and sponsorships (and sometimes mysterious or unknown Maecenases). Transfer fees are (back to being) no more than a means of exchange. In consequence the higher transfer fees don’t affect the biggest clubs. It’s the smaller clubs who can’t join follow the rise in fees, they are in trouble.

But is Paul Pogba worth € 105 million? According to the website transfermarkt.com, which is widely accepted as the standard for player’s value estimation, he’s worth ‘just’ €70 million. How player value is calculated not always clear. The most obvious criteria are age (read: potential) and general performance (read: the amount of goals or assists a player can provide). So generally speaking defenders are worth less, although the young English defender John Stones was recently bought by Manchester City for around 50 million euros (value estimated by transfermarket.com : €28 million).

Let us consider these ‘general’ criteria. Gary Lineker was in a way right to point out that Paul Pogba is the first foreign world class player who comes to the Premier League in his prime. Normally English teams buy players who proved themselves abroad and didn’t have much more potential left. They would pay exactly for what they would get. The lack of remaining potential was often a reason for other teams to let those players go, for example Barcelona’s Cesc Fabregas or Real’s Angel Di Maria two years ago. Higher potential boosts the value obviously, even though the current level of performance might be similar. And Pogba is expected to have huge potential.

But does he? He is a formidable player in the way he was used by Juventus the last couple of years, in a system with three central midfielders where he plays the leftmost one. In that position he could show, his pace, his skill to regain the ball and his quality when he’s on the ball. He could make dangerous penetrations, without worrying too much about his defensive position. He is probably the best player in the world In that specific position, in that specific formation. But can he still improve in that position? Both his attacking and physical statistics seem to be at their maximum. He could provide a couple of goals more and gain more possession, but the difference will not be enormous. So paying €105 million seems a little overpriced for just those specific set of skills. There are definitely other players who would cost half of his price and would perform just a little less (I’m thinking of Koke, Rakitic or Vidal for example).

Then maybe it’s because he improves the level of the other ten players? A brilliant piece by Michael Cox in The Guardian pointed out that José Mourinho, who was planning on playing a 4-2-3-1, will probably have to change his formation to put Pogba in his favourite position in a 4-3-3. This would mean that Manchester legend Wayne Rooney would be sitting on the bench from now on (a tough decision to take, but considering his last year, probably a right one). But even then team still looks unbalanced, for example no world class wingers with Martial and Mkhitaryan out of position and Depay out of confidence. So the most expensive signing ever isn’t even perfectly fitting in the coach’s A-game. Sounds weird and a lot like Louis Van Gaal’s signing of Ángel Di María in 2014.

Euro 2016 showed that Pogba is not at ease in a 4-2-3-1. He played in the centre together with PSG’s Blaise Matuidi, who is also not a natural defensive midfielder. Maybe that’s where Pogba’s potential lies. Next to a genuine defensive midfielder such as Carrick or Schneiderlin, he may find himself a new way in the 4-2-3-1 that seems better fitting for the current United Squad. If Pogba, together with his Manchester teammates, would be able to play flexibly both a 4-2-3-1 and 4-3-3 formation, then his signing would really push the entire team around him to a higher level. José Mourinho would be offered some great tactical opportunities. In that way €105 million doesn’t sound so stupid.

In any way, The Mancunians are All-in with this transfer after three horrible post-Ferguson years. They felt compelled to do such a bold move, to start a new era in the club’s history. Since there are no teams to which they can re-sell the player for more money, there is no other option than for Paul Pogba than becoming the core of Manchester United for the next half a decade (at least). If he can develop himself and become a tactically more flexible player, then this move could turn out to be a milestone. But there are quite a few obstacles on his path. Can he adapt to a new way of playing in the Premier League , which involves a higher pace, with a higher risk of injuries? A serious injury would really mean money down the drain this time. Can he cope with the pressure to perform well? His transfer fee is only one factor in this, the top teams are expected to be better than ever before. Can he cope with teammates, who might not all be on his level, and with José?

€105 million is a risk. But with Paul Pogba as the heart of the team, Manchester United could not only regain the level they should, they could also maintain their position as a world class team for a long time. And that kind of continuity is, especially in today’s football, invaluable.